is a television host, social media influencer, producer, content creator, and public relations specialist. She is the creator and owner of the ¨Ari Global Show¨ and the CEO of ¨Global Entertainment Enterprises. ¨ She strongly believes that everyone has an inspirational story to tell. She has a special gift for connecting with her interviews and audience. Her mission is to inspire people to achieve their true potential through her interviews and content. She has interviewed more than 300 top celebrities including Jennifer Lopez, Nicky Jam, Amy Schumer, Vanessa Hudgens, Antonio Banderas, Natti Natasha, Prince Royce, Alejandro Sanz, Shaquille O ́Neal, Tyler Perry, Luis Fonsi, Eva Longoria, Samuel L Jackson, Ismael Cala, Anna Kendrick, Gerald Butler, among others. She has over 500,000 followers on Instagram and 1 million average monthly interactions on YouTube. Some of her Youtube interviews have garnered more views than those of major networks like Univision, Telemundo, E! Entertainment, and Hola TV on Youtube. Her interview with Ozuna reached more 3.7 millions views, making it the most watched interview of him on that platform. Fluent in Spanish and English, she was born in Venezuela, and has lived in many different cities including Paris, New York, Miami, and Madrid. Her upbringing, education, and exposure to different cultures have given her a unique perspective that she conveys in her work.

Ari Global is a well known and bilingual tv host and Influencer. She is also the CEO of Global Entertainment Enterprises, a production and marketing company. She has interviewed Hollywood celebrities, famous singers, sports figures, and top performers across the world. The main purpose of her interviews and her work is to inspire people by creating meaningful and insightful questions for her guests. She is a graduate of the American University of Paris, majoring in Global Communications. She received a certificate in Event Management from New York University, and a certificate in English as a Second Language from Georgetown University. In London she attended a Professional TV Presenting and Media Training course at the BBC. Ari Global has a strong presence in many facets of the entertainment industry. She has worked as an influencer on several marketing campaigns: Lexus, Flat Tummy, Visit Israel, the movie “The Nun, ” and Warner Bros, to name a few. She has been a guest and collaborator on networks such as CNN, NBC, ESPN, Telemundo, Hola TV, People en Español, and Univisión. She was featured in 3 magazine covers in New York City: En Vivo Magazine NY, Hispano América News, and Sport & Más. Ariana was from an early age always drawn to volunteer her services for a cause. She participated as a volunteer for community events at the UCCA University in Peru, helping young people who did not have enough resources to receive a better education. She has also done volunteer work at different organizations like Unicef, Las damas Salecionas, UCCA university in Peru and others. In addition to half a million followers on Instagram, Ari Global has 50,000 followers on Facebook, and 30,000 subscribers on her YouTube channel.. Her interviews are available on digital platforms around the world such as Spotify, Apple, iTunes, I Heart radio, and YouTube
AWARDS

– National Association of Professional Women: Ariana has received the VIP Woman of the Year Circle Award for her excellence in leadership and her commitment to her profession. The National Association of Professional Women is considered to be one of America’s top associations by Forbes Magazine. – Estrellas Digitales: Entertainment and Fashion Influencer” award given by Estrellas Digitales, produced by Dalcroma Digital Marketing. – America Developing Smiles “ Asociación Damas Salesianas: Non–profit organization . Ari Global received a recognition awarding her commitment and outstanding dedication. She hosted EL Gran Gaitazo 2018 for more than 6 hours in front of an audience of thousands. The main purpose of this organization is to raise money to help children in Latin America with their education.

Her passion for entertainment and production inspired her to create her own TV segment called ARI GLOBAL Show. Ari Global Show is a motivational and entertainment bilingual (Spanish- English) TV Show, where they have guest stars: actors, singers, entrepreneurs, athletes, influencers and the most popular public figures of the moment. The main purpose for each of her interviews is to inspire people by creating careful and insight-ful questions for her interviewees on how their personal mission has shaped their careers and success . As a TV host Ari Global has interviewed Hollywood actors from films like: Mission: Impossible – Fallout, The Ring, Star Wars, Sicario , Spiderman, Baby Boss and Aquaman. Recently, she interviewed Oscar winners like @Benicio Del Toro; top actors like Samuel Jakson, the most trending singers like Niky jam among others. She has covered many red carpet events, music award shows, and galas: The Billboards in Las Vegas, Latin Grammys, Los 40 Principales in Spain, Super Bowl, Miami Fashion Week and the Saint Jude Gala. Ari Global Show is distributed in different Tv outlets in the US ,Latin America and top digital platforms. . You can listen to her show at 1# podcast platforms such as Apple, Itunes, Spotify, Google podcast, Deezer , I Heart Radio , SoundCloud and Stitcher

Ari Global is the CEO of Global Entertainment Enterprises . It is a high impact audiovisual productions and branded content company that knows how to take your communications to the next level internationally. The company has extensive experience in the market since they worked with many clients, entrepreneurs, talents and leading international brands. The company offers4 several services like social media management, productions, filming , events organisation, branding, design, public relations, media press, marketing among other services . 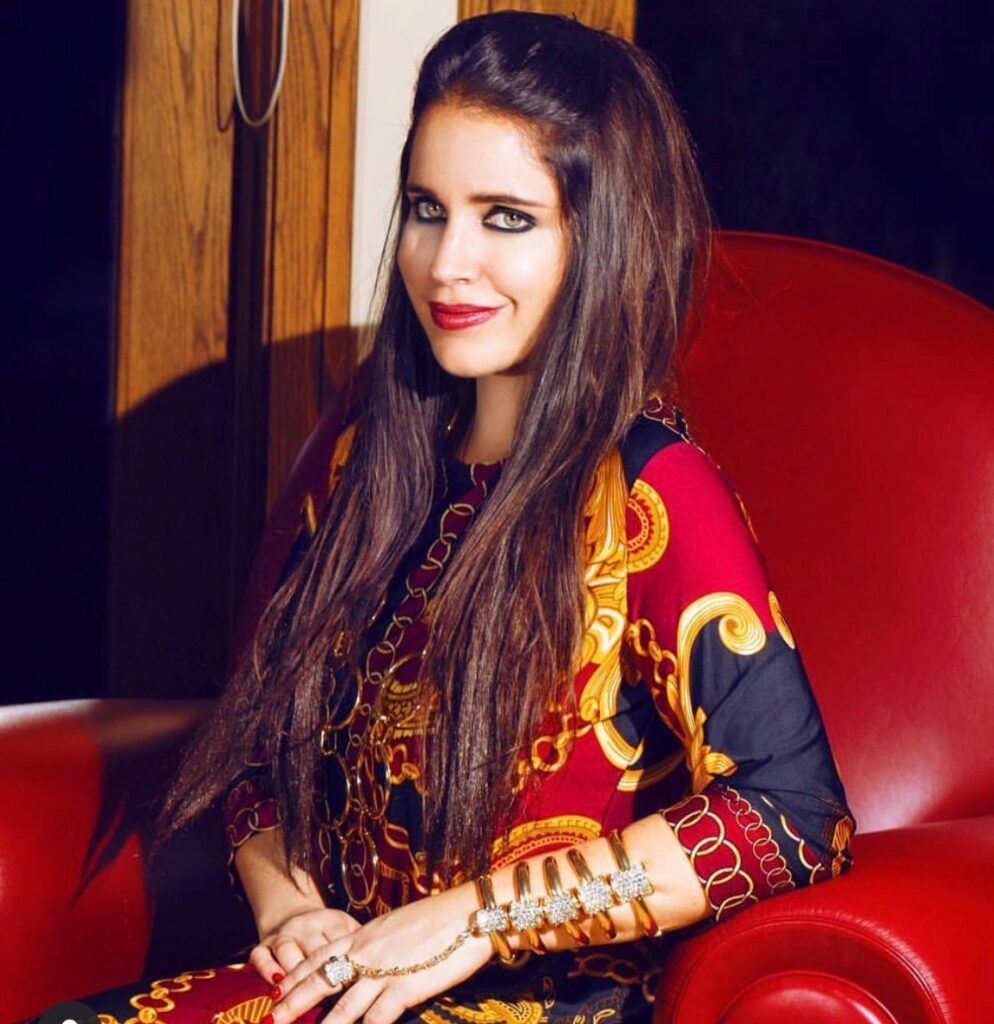 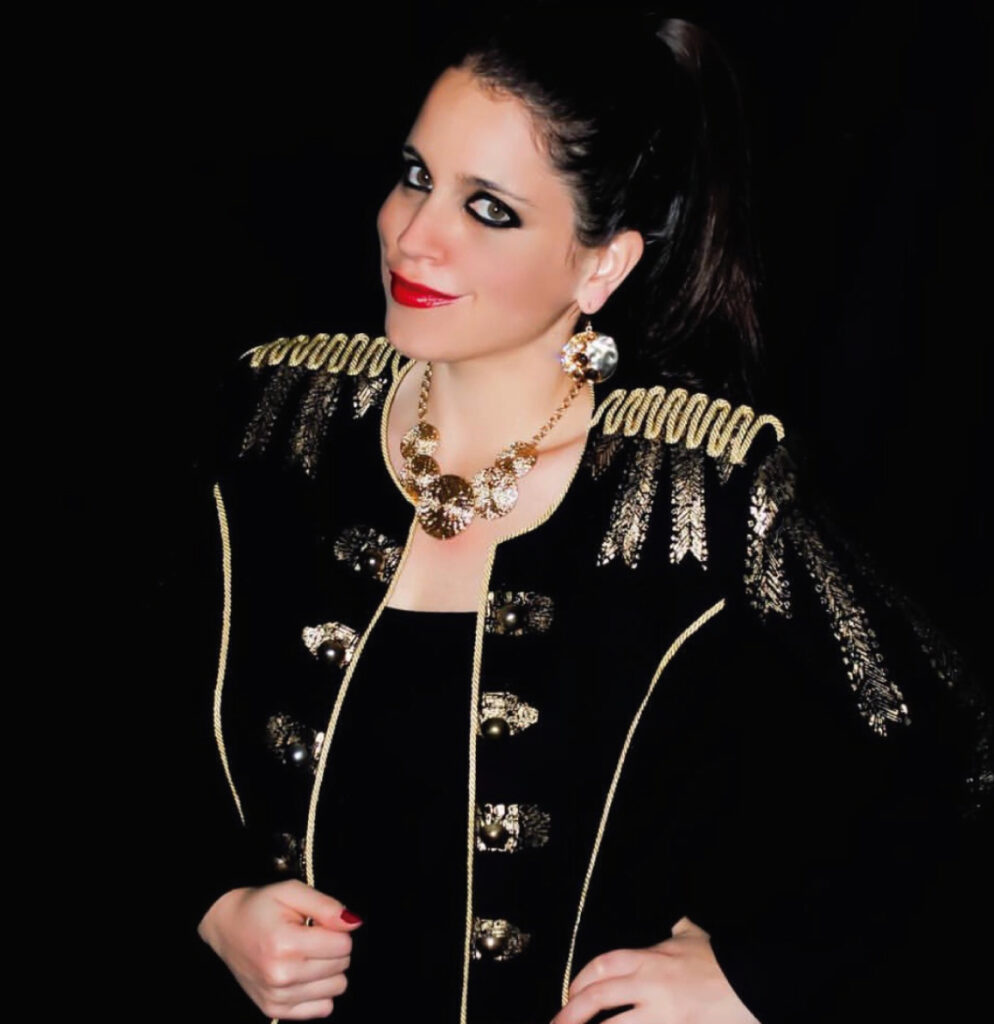 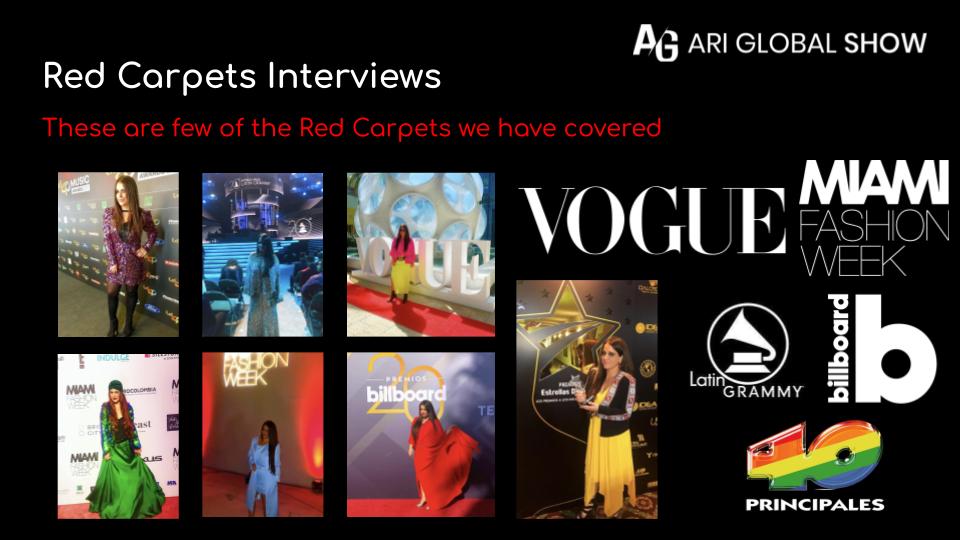